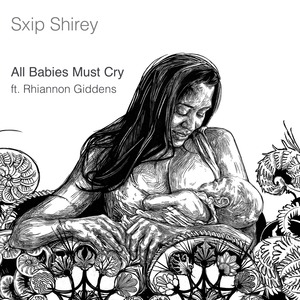 “All Babies Must Cry” is a folk song by NYC-based multi-instrumentalist, singer-songwriter, and contemporary circus composer Sxip Shirey and Grammy Award-winning artist Rhiannon Giddens. The song and accompanying video are designed to serve as a fundraiser for RAICES (Refugee and Immigrant Center for Education and Legal Services), an organization at the forefront ...

of providing legal help to immigrants and refugees.

Back when he was in his twenties, NYC-based multi-instrumentalist, singer-songwriter, and contemporary circus composer Sxip Shirey had an idea to write a timeless folk song, the kind that people would still be singing in 500 years, even if no one remembered who wrote it. “I always had this sense that whatever meaning a songwriter originally puts into a song is often kinda shallow in comparison to that song’s real interpretive potential once other people get a hold of it, relate to it, and give it new meaning in terms of their own lives.”

So when he penned “All Babies Must Cry” all those years ago (as a simple reaction to the Christian mythology that Jesus never cried), little did he know that the song would take on a whole new life and politically charged meaning more than twenty years later. It’s time had come and it would not only resonate with concerned world citizens facing down one of the greatest political atrocities of our time, but it would also carry a whole new meaning for the songwriter himself, as the new father of a five-month-old baby teamed up with Grammy Award-winning artist Rhiannon Giddens on a powerful new version of the track as a stunning response and indictment of the mass detention of children at the border of the United States and Mexico.

Both the song and accompanying video are designed to serve as a fundraiser for RAICES (Refugee and Immigrant Center for Education and Legal Services), an organization at the forefront of providing legal help to immigrants and refugees. “The situation at the border is horrifying,” says Sxip. “The U.S. should not be separating children from their parents and keeping them in cages. No one should even have to say that publicly.”

Sxip and Rhiannon share a friendship and artistic relationship that began over a decade ago when they often shared the bill on tours and music festivals around the world. Back then, Rhiannon was fronting the Carolina Chocolate Drops and Sxip was with Luminescent Orchestrii. In 2010, the bands teamed up to release an EP together that was released on Nonesuch Records and they toured briefly in Scotland, Wales, and Ireland. An early version of “All Babies Must Cry” was part of the set.

But it wasn’t until Sxip’s wife and artistic partner, Coco Karol, woke him up one morning after having read about the separated and caged children and said “we have to do something” that the song became a new focus.  “We decided to record this song to raise money for the legal fees for the children who've been separated from their parents,” says Sxip. Now parents to a new baby themselves, Sxip and Coco’s hearts both sunk and went out to the children and their parents who are the innocent victims of new kind of geopolitical callousness. “When I think of these babies separated from their parents, it punches me in the heart. I feel it viscerally. The banality of true evil,” he said. “We read about this 4-month-old baby who was separated from his parents at the border. Now he is nearly 2 and still can't speak or walk."

Recording the track at the World Academy of Music and Dance at the University of Limerick in Ireland, Sxip knew Rhiannon was the perfect voice to sing the song. Rhiannon and I are very close friends. For years, while she was on tour with the Chocolate Drops, I was on tour internationally with the contemporary circus show LIMBO ..and we would message each other the entire time about our adventures, and our heartbreaks, and all that,” says Sxip.

The song and video were recorded live, with videographer Laura Aurora and engineered by Danny Bride. The beauty of the recording, says Sxip, is that it was mainly just him and Rhiannon connecting musically in a room with two microphones. “It's not multi-tracked. Nothing is manipulated. We're just doing it, you know?” The song, played in a drop G to B tuning with a finger-style pattern that Sxip says was inspired by a '90s hip-hop beat, is powerful in its subtlety. And the video catches the mood superbly, especially when you see a backlit Rhiannon, rhythmically swiping the fingers of one hand across the palm of the other, just within earshot of the microphone, as if offering sensual reminder that real humans, flesh and bone, are being affected by these policies.

Ultimately, the song and video were both done with the hopes that they will be a catalyst for raising money that will help reunite families or help children who are being held in appalling conditions at the border. “I felt like this is one of the most useful songs I've written because I always found that people put their own meaning into it. I wrote it as a reaction because, growing up, you hear people repeat that Christian mythology that Jesus never cried.  But I was like 'surely all babies must cry.’ And when we started putting children in cages, suddenly this song started resonating with me anew. So, I knew I had to record this song as a reaction to that atrocity … and I recorded it with Rhiannon because she brings a lot of depth to it.”

Rhiannon sang three songs on Sxip’s last album, A Bottle of Whiskey and a Handful of Bees, which was reviewed by Milo Miles on NPR’s Fresh Air, who called it “A 21st century music creation.”  She also just received a GRAMMY nomination for her 2019 release there is no Other.