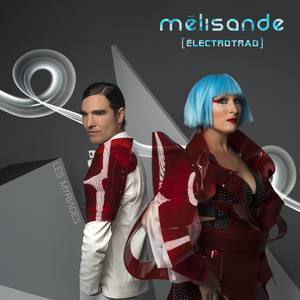 QUÉBEC TRAD FOR THE NEW MILLENIUM

a hint of full-bodied bass. Shake vigorously, garnish with a sparkling singer and serve on stage!

The eclectic duet pursues its creative journey between tradition and modernity with its third album Les my-riades (Borealis Records, 2019). The songs proposed were discovered through an important field recording project with elders led by Mélisande and Alexandre «Moulin» Grosbois-Garand in 2018 along the banks of the Richelieu River. This great adventure allowed the artists to take their ethnological efforts even further and to discover sympathetic people from their region. Mélisande and “Moulin” have fused their ethnolo- gical music roots and traditional instrumentation with complex electronic programming to create a sonic experience like no other. Surrounded by two seasoned musicians and a flamboyant breakdancer (optional) to present a highly energetic show!

Quebecois electronic duo Mélisande [electrotrad] bring their eclectic admixture of tradition and modernity to U.S. with showcases at APAP|NYC and Folk Alliance International Conferences in 2020

Surrounded on stage by two seasoned musicians crossing fiery fiddle strides with flute, jaw harp, banjo, foot stomping and frenetically booming bass, Mélisande [électrotrad] always puts on a highly energetic show and is in peak form in its live emanation. As an option for bigger stages, a flamboyant breakdancer can be added to the performance. With fresh forward momentum from the domestic success of its third album Les myriades (Borealis Records, 2019), the husband-wife duet is set to open the New Year by bringing its potently energetic admixture of tradition and modernity to the U.S. to promote its latest album in conjunction with two official showcases at the APAP (Association of Performing Arts Professionals) and FAI (Folk Alliance International) 2020 conferences.

Mélisande [électrotrad] will be featured along with Folquébec on January 11, 2020 at New York City’s 2020 APAPINYC 2020 Conference conference showcases. The conference and its highly attended showcases attract thousands of arts industry representatives to New York in search of artists to present on their stages in future seasons. The showcases often provide a glimpse of the year’s emerging artists so that venues, theaters, or performing arts centers can expose their audiences to music and people from different communities, while also giving artists an opportunity to build cultural bridges and represent the issues that matter to them in their own ways.

Next, Mélisande [électrotrad] will be one of 180 artists /acts from 22 countries and a wide array of genres to have been jury-selected to perform in Official Showcases during the 32nd annual Folk Alliance International Conference that is slated for Jan. 22-26, 2020 in New Orleans, Louisiana. As the world’s largest gathering of the folk music industry and community, the FAI Conference annually draws nearly 3,000 participants. Through its theme of “The Story of People and Place” this year’s conference will focus on cultural equity — with some programming exploring such topics as diversity, inclusion, immigration, intersection, and influence. Mélisande [électrotrad] is just one of the acts chosen to present 30-minute sets on full-production stages with lighting and sound before presenters, agents, managers, media, fellow artists, and others in the music industry during the 2020 music business conference.

The songs populating the album and making up the band’s current live-sets were unearthed during a collection project led by Mélisande and Alexandre "Moulin" Grosbois-Garand with community elders in along Quebec’s Richelieu River in 2018. This folklore and music-infused  adventure allowed the couple to push its ethnological passion further in discovering colorful characters from the region, including Ti-Pétard Allard, who lends his name to a track.

As the record’s first single “Ti-Pétard Allard” has been playing on over 55 radio stations since it dropped in August, with a 12-second segment aired three weeks in a row on the biggest talk-show in Québec “Tout le Monde en Parle”. Mélisande [électrotrad] has been steadily making the rounds with radio interviews at stations around the province and they have an upcoming booking for a soon to be announced coast to coast morning TV show for December 26th on Radio-Canada RDI.

When asked about creative process, the duo says: " Through our visits to the networks of the Québec Golden Age Federation, Knights of Columbus, Legions and community organizations, we met and recorded a twenty friendly and generous singers from our region. We then adapted and arranged a selection of songs that we liked and that suited our mix of genres. We also surrounded ourselves with inspired designers to give our '' sound '' a more modern signature and we dared an extravagant look, allowing us to reconnect with the eccentricity of our respective beginnings in the 1990’s."

The band plans on releasing a music video in January. Details to be announced.