Beyond the Pale 2020
Announcement 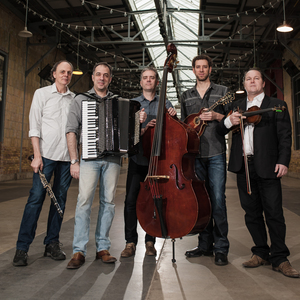 Beyond the Pale is one of Canada's most innovative and exciting acoustic roots ensembles. The group’s boundary-busting sound is anchored in klezmer and Balkan styles, but spills seamlessly into the cracks between folk, bluegrass, jazz and chamber music. Stellar musicianship, unique songcraft and exuberant energy are the foundation of Beyond ...

the Pale’s richly-textured sound, which can range from a raucous roar to an intimate whisper.

Beyond the Pale are three-time Canadian Folk Music Award winners (seven-time nominees), and have toured extensively across Canada, the US, Europe, Australia and Brazil during their 22-year career.

Toronto’s Beyond the Pale brings its Balkan-Klezmer fusion to the Western U.S. with February tour

Beyond the Pale, Toronto’s award-winning acoustic-roots ensemble known for its unique take on klezmer, Balkan and Romanian music is bringing its string- and reed-powered sound to the U.S. West Coast with an 11-date tour of venues and festivals in Washington, Oregon, California, and New Mexico this February. While the band is kicking off its 22nd year together and has previously toured extensively in the U.S., these will be their first west coast shows in nearly a decade, as well as their first-ever foray into the musically rich Pacific Northwest.

The occasion has prompted BTP co-founder and mandolin player Eric Stein to reflect on the band’s longevity, and how klezmer (east European Jewish instrumental folk music) has evolved over the band’s lifespan. “When Beyond the Pale started in 1998, the klezmer music scene was still something of an obscure, countercultural insurgency, existing on the fringes of both the Jewish community and the broader music world. In the last couple of decades, that’s all changed. The music has blown up in myriad directions, and klezmer seems to be everywhere these days, sometimes in the least expected places.”

Indeed, Beyond the Pale’s upcoming tour will bring them to an eclectic variety of communities and venues, ranging in size from 500 to 50 seats, and including churches, a museum, a contemporary cultural arts center, and a chamber music series, along with the to-be-expected Jewish community centers and synagogues. That mix of venues and audiences actually makes this a typical BTP tour, says Stein, noting the band’s many past appearances at jazz, folk, classical and world music festivals and venues. In fact, he is quick to disclaim the klezmer label as “perhaps misleading and certainly insufficient” to convey the diversity of the band’s influences and the eclecticism of their sound.

“We borrow freely from many musical styles and we are unorthodox in our approach. Our overriding goal is to sound distinctly like ourselves, and in that respect I think our music has especially explicit similarities with progressive bluegrass and what some call ‘New Acoustic Music’.”

Citing such influences as David Grisman and Béla Fleck, Stein further sketches the conceptual parallel he sees between BTP’s European-based acoustic fusion and the Americana-based sounds of those iconoclastic innovators. Says Stein, “the spirit behind the music is similar. Acoustic instrumentation and a foundation in traditional influences serve as common points of departure, in their cases as in ours, but after that, anything goes!”

Whether you’re an aficionado or a neophyte when it comes to klezmer, BTP’s flirtations with sounds from outside that tradition make for an adventurous but down-to-earth musical mix that is best appreciated on its own terms. While they may be unlikely to pass a klezmer traditionalist’s purity test, only the most jaded observer could fail to appreciate the group’s unique artistry and distinct collective voice. Their unifying resonance comes across perhaps most clearly in the group’s palpable shared energy on stage.

“In our live shows, audiences respond as much to our interpersonal dynamic as to the music itself,” asserts Stein. “We don’t do any shtick, we just play, but there is a visceral and authentic energy between us that’s infectious for audiences. They can practically see sparks flying.”

That joyful connection has kept the quintet developing and exploring for over two decades, an impressively long run for any band, much less a group of progressive acousticians anchored in decidedly niche styles. They’ve won wide critical acclaim, captured three prestigious Canadian Folk Music Awards, and have brought their music to such far-flung locales as Poland, Australia, and Brazil. They’ve recently begun work on their fifth studio album, and the upcoming tour will include recording sessions in Los Angeles, joined by special guests.

There is also something uniquely Canadian about the group’s freethinking musical approach and its multicultural membership. And Stein notes with pride and gratitude that this tour, like many of the band’s previous recording and touring endeavors, is supported by federal and provincial grants. “We’re very thankful to have this kind of ‘official’ support, it provides a powerful affirmation not only of the artistic value of our work, but of the innate value of artists in society.”